To view the information contained below in PDF format, click here (4 pages).

The framework for municipal government was developed in the area now known as Saskatchewan long before there was much to govern. The 1881 census had counted just over 19,000 people, (15,000 First Nations, 3,000 Metis and 1,000 British and Canadian settlers), but local government was born. In 1884, the area of ten rural municipalities in the southeast and the towns of Regina and Moose Jaw were defined by proclamation. Full-fledged municipal government was more than most early settlers could afford. In 1896, only the RMs of Indian Head and South Qu'Appelle and the two towns remained. The basic needs were roads and protection from the prairie fires. Between 1890 and 1896, fifty-seven Statute Labour and Fire Districts were established with two tasks: building roads and plowing fireguards, with compulsory labour by local residents. Ratepayers decided at annual meetings what would be done and were subsidized by the Territorial Government to do it, but they disliked the compulsory labour. 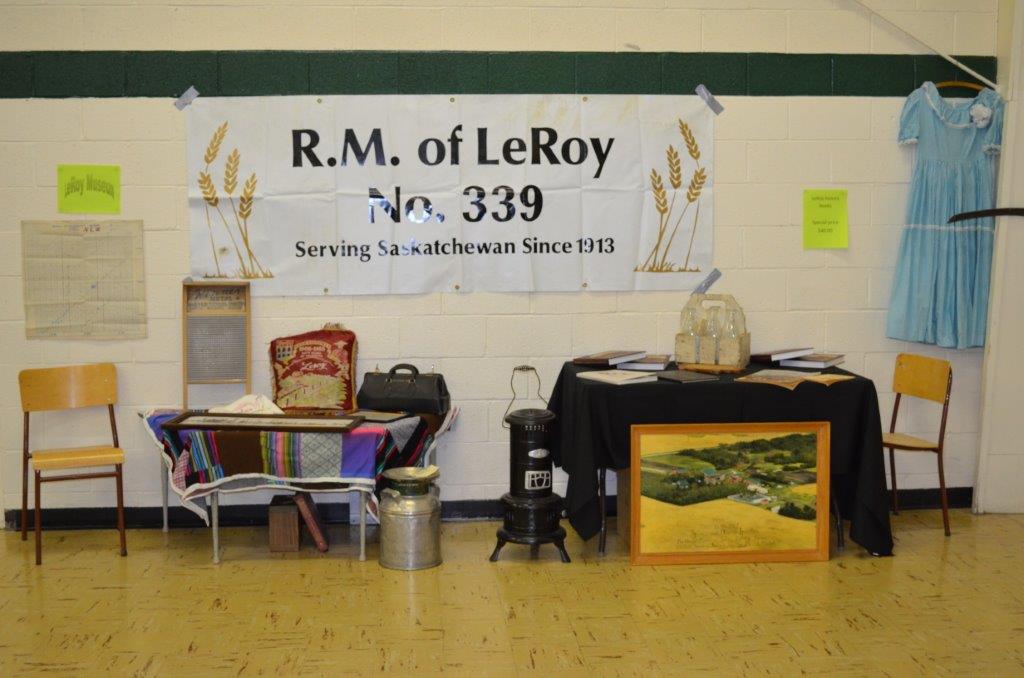 Demands for local government services were part of the push for provincial status, achieved in 1905. In the same year, the Local Improvement District Association was formed. It changed its name in 1911 to the Saskatchewan Association of Rural Municipalities (SARM). Municipal governments were organized as the government closest to the people and to govern local issues.

The province still only had two rural municipalities. Saskatchewan was quickly being settled - two-thirds of all Canadian homestead entries were in Saskatchewan in the year ending June 30, 1906. There were 55,971 farms and a rural population of 209,301. It was clear that effective municipal government would be essential.

A settlement of significance to the RM of LeRoy history was the 1905 establishment of Sinnett - an Irish Catholic Colony by missionary Father Sinnett. This was once a thriving community, however no one has resided there since the early 1990s. At the request of the former congregation, the St. Ignatius Roman Catholic Church near Sinnett was designated a municipal heritage property for its architectural and historic value. This is the only designated historic site in the RM of LeRoy.

By 1907 all available homesteads in the area had been filed. The early settlers were mostly English, Scottish, Irish, Scandinavian and German. The men usually came first to prepare a home for their families. Progress was very slow since the area was thickly wooded with poplar and willow trees. Sloughs were common in low lying areas. The soil varied but consisted of mostly black loam with clay subsoil, which produced good crops when cleared. Early frosts usually resulted in low grades, and of course, lower prices.

In 1907, the first school, known as Bogend, was built one mile east of the present town site. Presbyterian Church and Sunday school were held in the school and attended by everyone for miles around. It was also the gathering place for picnics, dances and ball games which were the main sources of entertainment at that time. The number of schools continued to grow to a total of eighteen school districts.

The Rural Municipality Act gave elected councils vast responsibilities: public health and prevention of the spread of contagious diseases, nuisance grounds, cemeteries, aid to build and maintain hospitals, aid to needy residents, planting and caring for public trees, ensuring honest weights and measures, preventing cruelty to animals, controlling dogs, carrying out the Wolf Bounty Act, preventing prairie fires, licensing pedlars, regulating storage of gunpowder, regulating steam engines, granting aid to agricultural societies, census of the RM, and exterminating animals found to injure and impede agriculture. Council looked after the roads, removed dirt and rubbish from them, regulated the use of bridges and highways, implemented speed laws and prevented obstruction of streets. To cover the cost incurred for these services, municipalities were provided authority to tax land and establish tax rates. Education was made the responsibility of school districts and their boards, another arm of local government, but municipal councils were required to collect school taxes and remit them to the school boards.

The Local Improvement District No. 339 was incorporated in 1913 as the RM of Roach No. 339 and renamed RM of Ayr No. 339 in 1914. In the early years council meetings were held in residences and it wasn't until 1921 that Council determined that it would be best to meet in the "new town" being the Hamlet of Bogend (later renamed LeRoy). In 1921 and 1922 the Hamlet of LeRoy was administered by the rural municipality. In 1930 the name was changed to the Rural Municipality of LeRoy No. 339. The namesake was Private John LeRoy who was killed in action in France in 1917, his family being one of the first to settle in the area.

Municipalities were formed to service land, therefore many of the "people" responsibilities the municipalities were given in 1908 - health and social services, for example - had been taken over by the provincial government, though RMs maintained an interest in those areas, especially as rural population declined. Municipal services to land - roads, first and foremost - do not change as population shifts. The land remains productive and must be serviced.

During the depression years and World War II, all councillors were to adhere to the rule that all road work be done by ratepayers and that the amount of work done be applied to taxes. As well horses owned by ratepayers and used in road construction were considered when working out taxes. By the end of the Depression in 1941 the population of the RM was 2,245 - this was the highest recorded census in the RM and was almost double the 1911 census of 1,248.

In 1920, the Canadian Pacific Railway was built, linking LeRoy with Lanigan and Watson. During the 1960's the abandonment of railway branch lines became a great concern to the RM. The railway system in Saskatchewan was developed at a time when there were few roads or highways.

During the 1940's, the Royal Canadian Air Force No. 5 Bombing and Gunnery School (Dafoe Airport) was located on the east side of the RM along Highway No. 6. Training exercises included bombing over the Quill Lakes. When the Base was closed many of the buildings were moved to surrounding communities. One of the buildings became the LeRoy Hospital which is now Evergreen Country Home and another was the LeRoy Legion Hall which is now the School of Dance. In 1946 the LeRoy Union Hospital was formed and served all residents of the Town and the RM, the RM having paid 95% of the cost of the new hospital. The LeRoy Ambulance Service, established by the LeRoy Union Hospital Board, did not dissolve when the hospital closed. It remained in operation through volunteer services. In 1969 the Town of LeRoy and the RM jointly formed the LeRoy Volunteer Fire Department.

In the early 1950's horse and buggy days were coming to an end. With changes in the mode of transportation the need for better road standards had become eminent. In 1950 the municipality petitioned the government to assist in construction of an all-weather market road from the Town of LeRoy to Highway No. 6. The road improvement commenced in 1953/54, was reconstructed in 1967, and was eventually taken into the secondary highway system. In 1956 the government introduced the grid road system and ten years later the main farm access roads came into being. 1965 marked the conclusion of the ten year Grid Road Program, during which period 63½ miles of grid road had been constructed in the RM. Trucking became an important mode of transportation with the development of the grid road system and provincial highways.

Along with the development of modern agriculture methods and development of grid roads, landowner concerns were raised in regard to proper drainage of farm land. The first significant request for the formation of a Conservation and Development Area for the municipality was lodged with the Minister of Agriculture in 1955. Five Conservation and Development Area Authorities and the Lanigan Creek-Delwood Brook Watershed Association were formed to give the municipality adequate drainage.

With changes to farming operations through the 1960's and 1970's, acres farmed by any one farm increased which resulted in a decrease to rural population. The 2011 Statistics Canada census reported the population for the RM of LeRoy as 490. The agriculture focus of the RM and surrounding areas maintains a major economic component, with Intensive Livestock Operations, cereal and pulse grain operations and cattle and bison production. With the recent introduction and development of potash in the area, the province has identified the RM of LeRoy and the surrounding area as a Rapid Growth Area. This has created interest in the area, influenced by the development of twenty-seven miles of municipal road (most of it paved) and contributed to the development of acreages and the creation of new yard-sites to service the anticipated growth.

LeRoy Leisureland Regional Park, which opened in 1970, with the collaboration of surrounding municipalities, provides regional residents with a nine-hole golf course, beach volley ball area, sand bottom swimming pool, camping and picnic area. The park has been upgraded over the years to include a licensed clubhouse, pro-shop and grass greens.

Over a hundred years since the initial settlement of rural Saskatchewan, municipal government and infrastructure has evolved. Current challenges for the municipality include maintaining and building infrastructure and land use planning to accommodate economic growth.

As we reflect on the past we can appreciate the foresight and accomplishments of our forefathers. Although there have been many changes over the past years, the commitment to serving the ratepayers is still the number one priority of the RM of LeRoy.